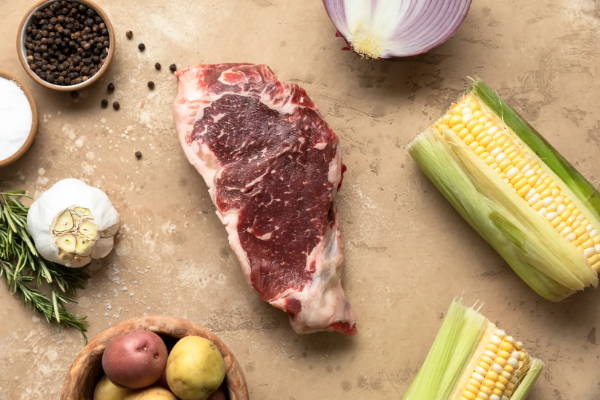 If you follow us on Instagram @hiddencreekfarmnj, you may have seen the rant that I went on regarding the misinformation & irresponsible journalism that New Jersey Monthly printed and distributed to thousands of recipients. In their April issue ‘The Great Steaks of New Jersey,’ the claim, “we do not raise beef in our ocean-hugging state,’ was made in the cover story. As a young first generation female beef producer, I find this claim to be especially triggering. At a time when agriculture is being made into a hot topic across media channels, misinformation being presented to those who are not educated on farming in the Garden State is a disservice to the industry and local producers.

While this false claim initially made my blood pressure rise, it also made me wonder just how many people read the article and believed it? Or more importantly, how many people read right over it, not even thinking twice that there was something to question in the text presented to them? I think that the latter is most likely the norm. Those living within city limits, may have never had this thought cross their minds because if the shelves at the market were full, it didn’t much matter to them where it came from. Though this doesn’t apply to everyone, there truly are some people who just believe that their food comes from the grocery store and have never seen the labor of love that comes with the title, ‘farmer.’

To the rest of the United States, New Jersey is often seen as the armpit of the country – filled with warehouses, highways & citizens who don’t know how to pump gas. Great pizza & bagels, sure, but does the general public living outside of New Jersey even know that it is the Garden State? Most importantly, that it was given that name for a reason. Nationally, New Jersey is one of the top 10 producers of blueberries, cranberries, peaches, tomatoes, bell peppers, apples, asparagus & squash (Shughes, 2022). Food and agriculture are the state’s third largest industry to this day, bringing in billions of dollars in revenue to the state. And no, it’s not all produce.

Family farms like ours can be found from left to right & top to bottom of New Jersey, covering nearly 720,000 acres of the state. In New Jersey, you will find everything from nurseries & flower farms to grain and consumption livestock operations. The USDA’s National Agricultural Statistics Service documented that in 2021, there was 7,800 head of beef cattle in state, along with 4,200 milk cows – I would be interested to know how bull calves, steers & dry cows of breeds that are traditionally seen as dairy breeds were classified in the study, as they make up beef production as well. These numbers do not represent the 24,000 feeder calves, replacement heifers, or stock that had not been born yet when the survey was done. It seems to me that New Jersey has no problem producing beef cattle, regardless of being an “ocean-hugging state.”

Cattle production looks different in every operation but there is one thing that holds true no matter what - farmers and ranchers take a whole lot of pride in their work. They are passionate, they are educated & they fight for the industry that feeds us. For some the focus is on superior genetics with bulls and semen extraction. For others it’s about selling feeder calves to operations who can’t keep up with demand, homesteaders & commercial beef producers. For farmers like us, it’s small-scale production and closing the gap between producer and consumer through education and the direct sale of animal proteins in our farm store – & we don’t stop at beef.

Right here in the Garden State you can find farmers that sell their products direct to consumer, whether its beef, pork, poultry, vegetables or otherwise. There are few sectors of agriculture that do not exist here, which given the small size of our state, is quite impressive. I would love to challenge not only New Jersey Monthly but also our own readers to find a new farmer or sector of New Jersey agriculture to educate yourselves on and support in some way this month. It doesn’t have to be monetary. This industry begins with education and ends with lack of. The industry that feeds us is one worth fighting for.